Once upon a time, a long long time ago, I lived that sorority life.

I’ll pause here so that can sink in for some of you, who are equally baffled and horrified at this revelation that I was a member of a college sorority house. (I wish I had photographic evidence for you, but I seem to have destroyed most of those photos in a fit of post-pregnancy rage and I think the rest were lost in a move.)

I won’t go into details on which sorority or college, as it really doesn’t matter. I was there for only a year, and left the university because I was wasting time and exorbitant amounts of money floundering around trying to figure out my life. (I do not recommend going to college and THEN trying to figure out your life path.) 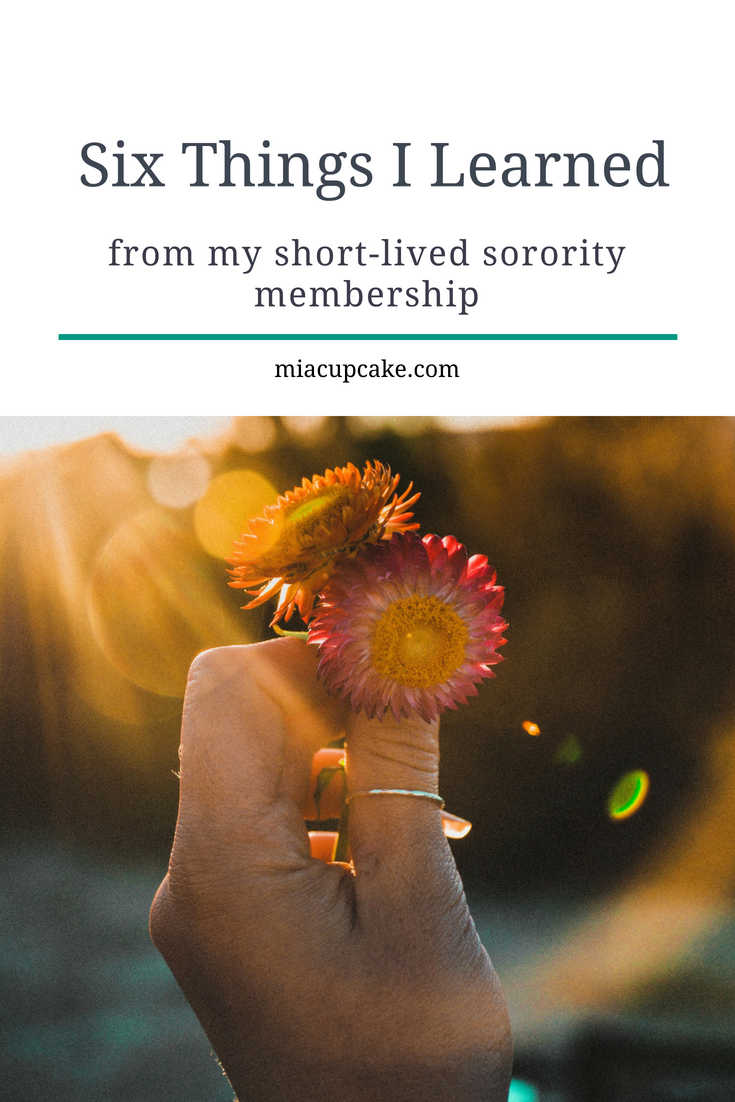 I did, however, learn a lot from the 9 months I spent as a sorority girl.

I won’t count the lessons on “how to get sheep out of a basement when your brother frat house decides to prank you” or “how to get blood out of your initiation dress because you tripped and fell down the stairs (totally sober)” or “what to do when everyone quits the junior panhellenic council at once except you and you have to run everything with no notes or notice” or “memorize the entire greek alphabet just in case someone stops you on campus and demands you recite it“.

Though each of those is totally a valid lesson.

As I watch all of my friends’ kids head off to college this fall, I thought I would spare some ladies from having to pledge Alpha Beta Gamma Delta Epsilon whatever and share the 6 most important lessons I learned in my short stint as a sorority sister.

1. Having a “sober sister” is essential in life.

The “sober sister” in our house was the one who stayed at the house and sat by the phone on Friday and Saturday nights. She made sure everyone got home ok, she organized taxis or sober drivers for parties, and she basically was the one in her “right mind” when everyone else was going bananas. (I was sober sister a LOT. I didn’t drink very much, and was fairly responsible).

Having a “sober sister” in your life is important. Someone you can go to when you have this big crazy idea and they’re your voice of reason. They encourage you to not quit your job to move to Bali (or provide solid information on how to get to Bali, depending on your situation). They ground you, they bring logic to your madness and keep you from doing something like leaving your whole support system behind to follow some dude who you are not-really-dating across the country. *ahem*

2. Table manners and basic decorum are enormous benefits in both business and personal pursuits.

We had weekly dinners where there was a dress code and servers and tablecloths. We were expected to read Emily Post’s Etiquette and behave accordingly. Our manners lessons went as far as multiple forks and passing the salt and pepper shakers together, even if someone only asks for the salt.

Even basic things like “keep your elbows off the table” and “put your napkin in your lap, not tucked in your shirt” are a bonus to have during business dinners, meeting-the-parents dinners or just dinner out in public. (And “decorum” usually just means “don’t burp or be gross at the dinner table if you’re trying to impress someone”.)

3. Synchronized cycles means that someone nearby has a feminine product if you need one.

Living with 60 women meant that once a month, someone would open the door to our house, shovel chocolate and kleenex in and run away in a serpentine pattern. Our house mom always made sure to stock up on ice cream, potato chips and chocolate chips every month, and to hide the TV remotes during That Time so we stopped watching sad movies and sobbing all day.

It also meant that we understood each other. We didn’t question each other’s crankypants. We were prepared because we all were going through the same thing at the same time. You always knew who had extras in their purse, and you always stopped your sisters from leaving the house wearing white for a few days.

4. Sometimes life throws things at you that you don’t know how to handle, and asking for help is not only recommended, sometimes it’s wholly necessary.

Half the time I was at the sorority house, I had no idea what was going on. We were called to the house to just stand in the lobby multiple times throughout the first few weeks of school. Literally just to stand there. Saying nothing.

I don’t follow rules horribly well and I was always the “but why?” kid. So one day, while we were standing there in silence, I blurted out “I really wish I knew why we were standing here…” as my big sis happened to be walking by.

She smiled and said “we were just waiting for one of you to question the idiocy of this exercise.”

Sometimes, you need to say the thing and ask for help. It is ok.

5. Women in large groups for extended periods of time can teach you lots of things about who to trust and who to avoid.

When you spend all week in a house with 50 other 20-something women (and a few late-teenagers), you see the good, the bad and the REALLY SUPER OMG ugly of them. You see the morning hair, what happens with faces when you remove all the face paint. You see non-spanx-ed bodies. You see anger, despair, and “get out of my way, I’m studying for finals.”

You also get to see who will lie to your face, or talk behind your back. You learn a lot about how to read faces and how to tell when people are blowing smoke up your butt about that guy from Sigma Chi and he doesn’t really like you and you’re being punked.

6. Get a bunch of women working together and it’s either glorious and productive, or it’s a complete and utter disaster area. Know your team so you’re prepared for whatever.

We had a lot of events in my short tenure as a sorority girl. A LOT.

And the events always went one of two ways: absolute flaming disasters and triumphant wins.

It all depended on the crew involved, and who the leadership was, to be honest. We had one house member who we knew would be the Wet Blanket. She would shoot down every idea anyone had, so we kept her from the planning portions of events, and put her on execution. She was excellent there.

We also had a member who was The Torpedo. She would (subconsciously or consciously, we weren’t sure) completely sabotage everything we did. Any event she was allowed to even help SET UP would fail miserably. Eventually, she was shut out of assisting with events altogether.

All in all, the sorority experience was one that I would go through again. The women I met there taught me so much, and the lessons I learned have stuck with me, all these years later.

Except the sheep incident. I would skip that part.