this post contains some Amazon affiliate links, meaning I get a few pennies to spend on new culinary gadgets or more cookbooks at Amazon if you use them, but you don’t pay any extra dough.

Some of you might think Ulla is my youngest child, but no.

Ulla is my tilt-head KitchenAid mixer (looks much like this beauty). Yes, she has a name. She also has an attitude and we have a very serious relationship and spend a lot of time together.

And today is her 7th birthday.

I won Ulla in a drawing from a well-known blogger that I don’t want to link to, because my taste for her has changed quite a bit. I screamed a lot and called a bunch of people and yelled a lot into my cell phone and basically lost my everloving mind.

How often does one win a KitchenAid mixer, really?

When you can put water and gelatin and sugar together and make marshmallows, somehow the world seems ok for just a minute.

Ulla arrived on our doorstep 7 years ago today.

And a lot has changed since that first day.

I named her Ulla because I thought it meant “red” in Norwegian…but it means something entirely apropos for me of late. It means “will or determination“.

Ulla got me through a horrible breakup, where I would bake for hours and hours for my coworkers and friends without resting to try and soothe my battered soul. 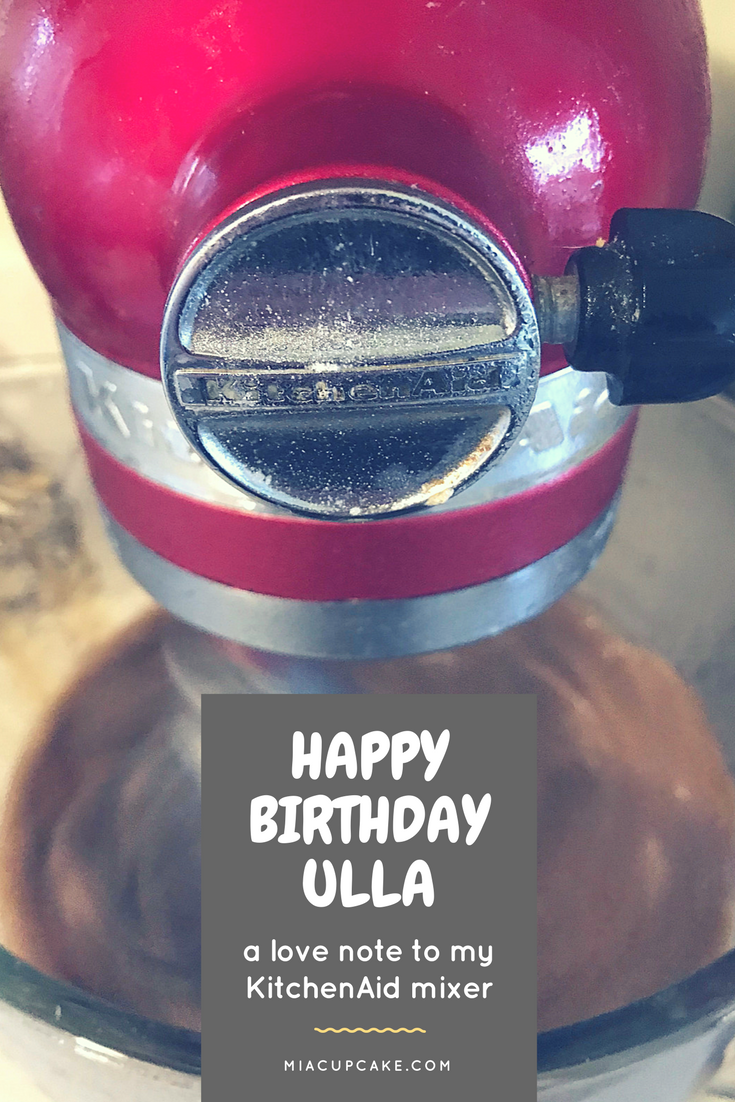 I know that feeding Ulla certain measurements of certain things will get me certain results, and only once has she failed me when her whisk beater broke.

Ulla is the first to get unpacked in a new house, and one of the last to get packed up.

Ulla has made 75 batches of marshmallows in the last 12 months.

Ulla has had several pieces replaced, and got a new fancy scraping beater like this one for Christmas last year.

Ulla is by far the hardest worker in this house.

Ulla and I are taking on a new venture in the new year that we (meaning me, since she’s an inanimate object) are really excited about, and will tell you about when the time comes.

I hope Ulla lasts forever, but I know there will come a day when Ulla will no longer function correctly. My grandmother had a 30 year old mixer that still worked when she passed away, so maybe Ulla will outlive me.

I hope we have many may adventures and delicious things to come, and I hope she’ll forgive me for that one time I dropped her on the floor when she was new.