The internet seems to be all a flutter about People’s pick for the “Sexiest Man of the Year”, Blake Shelton.

I’m horribly underwhelmed by that particular gentleman, but Twitter is absolutely roasting him, which kind of amuses me.

woke up this morning to news that blake shelton is the sexiest man alive. rip every sexy man in the world who died in the great sexy plague of 2017 overnight; u will be missed

This is an actual person existing in the world, but Blake Shelton was voted by @people as the #SexiestManAlive . The Devil is a deceiver. pic.twitter.com/D9zAhtBACo

(Lots of references to Jason Momoa – we will get to that in a minute.)

My friend Autumn commented on my Facebook post here, saying “…they could have put a potato on the cover instead of Blake Shelton and I would have been WAY more into it.”

I saw a comment on someone else’s Facebook post that said “he is the embodiment of the color taupe”. (that one made me laugh really hard.)

Luvvie Ajaya wrote an incredible piece (because of course she did, she’s amazing) about…well, just go over there and read it.

Oh, and here’s the cover picture in question: 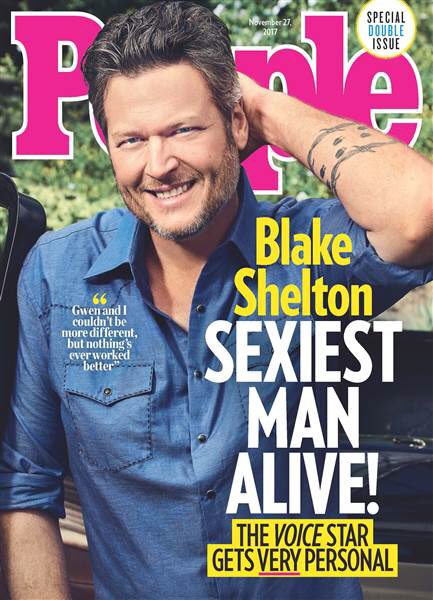 I don’t look at him and say “HOLY SMOKES, HE IS SO LOVELY I JUST DIED“. That’s usually my benchmark for a sexy dude. I just shrug and say “I think I saw that dude at the grocery store this morning.”

Now I am not ragging on Mr Shelton. He’s got some issues with his insides that Luvvie also outlines in her post, (seriously, go read it) but he’s ok-looking.

(It just dawned on me: he looks like one of the dads at one of my kids’ schools. Only that dad always shows up in suits, he’s very well-groomed and he can’t sing for love nor money.)

In the interest of helping People magazine NOT screw this up next year, I give you a list of 10 gents who would be a better contender for next year’s Sexy Dude On the Cover of a Magazine I Haven’t Read Since Bedrest with my Youngest 9 Years Ago: