This is a sponsored post, all opinions are mine.

I struggle to find the words to explain what the Comcast Internet Essentials program can mean to a single parent whose child receives the benefits.

(For those of you new to reading my blog, I am pretty emotional at times, and I cry a lot. I have a big heart. It’s ok.)

As a single mom for the better part of the last 19 years, I am no stranger to the heartaches of solo parenting. I had months where I struggled to keep the electric bill paid, when internet service was low on the list of priorities.  A laptop or desktop computer was a luxury that was nowhere on the horizon during those times. I used the computer at work if I needed to, but Wolfgang struggled to use the computer lab at school during lunch and after school as quickly as he could to finish those assignments.

Oftentimes he would leave the house early and walk to school to use the lab, or stayed until the janitor shooed him out after school. He never told me he was having issues, but we had some angels in our lives who stepped in when they saw us struggling to keep up, and they bought him an laptop and paid for our internet for a few months. 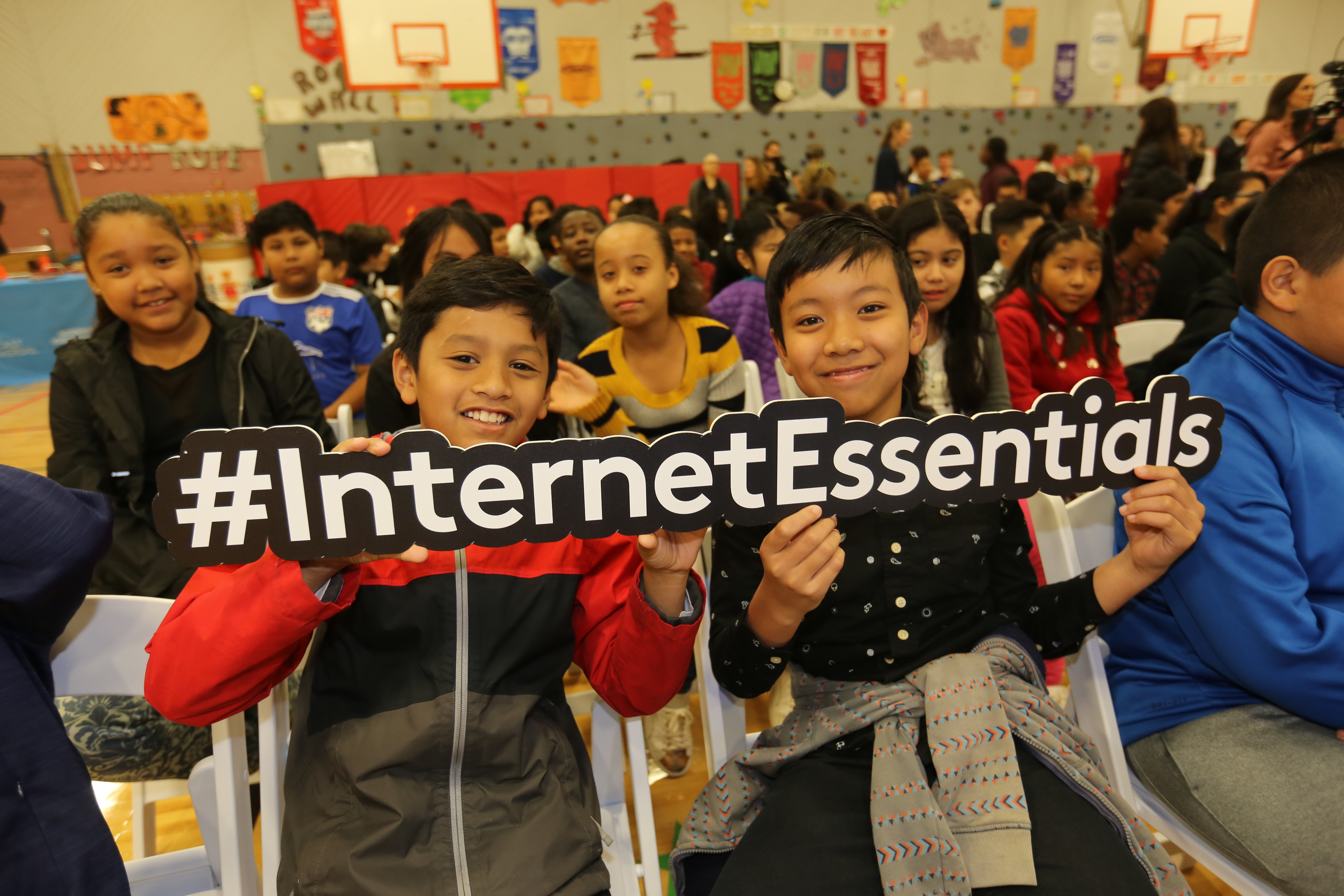 Photos from the Comcast Internet Essentials Back to School events, Tuesday, Oct. 9, 2018, in Seattle. (Ron Wurzer/Comcast)

Over the last seven years, Comcast Internet Essentials has been that blessing, that “hand up” for over 6 million low-income Americans, connecting over 1.5 million households to the internet (many of whom have never had an internet connection before). That’s being a good neighbor to their community.

Internet Essentials from Comcast is the nation’s largest and most comprehensive high-speed internet adoption program for low-income families. It provides low-cost high-speed Internet service for $9.95 a month plus tax; the option to purchase an Internet-ready computer for under $150; and multiple options to access free digital literacy training in print, online and in person.

Recently, Jocelyne Lamoureux-Davidson and Monique Lamoureux-Morando (U.S. Olympic Gold Medalists from the 2018 U.S. Women’s Hockey Team) were named as ambassadors and spokespeople for Comcast’s corporate values and initiatives. Recently, as part of a national tour, Jocelyne and Monique visited Seattle with David Cohen (Comcast Senior Executive Vice President & Chief Diversity Officer) and I was able to meet with them to hear more about the program.

Comcast has already, over the 7 years the Internet Essentials program has existed, invested over $550 million in digital literacy training and awareness, reaching over 8.5 million people. They’ve provided low-income Americans with affordable subsidized computers (over 85,000 of them) and connected those 6 million low-income Americans I mentioned earlier.

“This year’s headline,” said Cohen, “is that we’re extending eligibility for the program to low-income veterans. There are about a million low-income veterans who live within the Comcast footprint, about 60,000 of them in the state of Washington.” 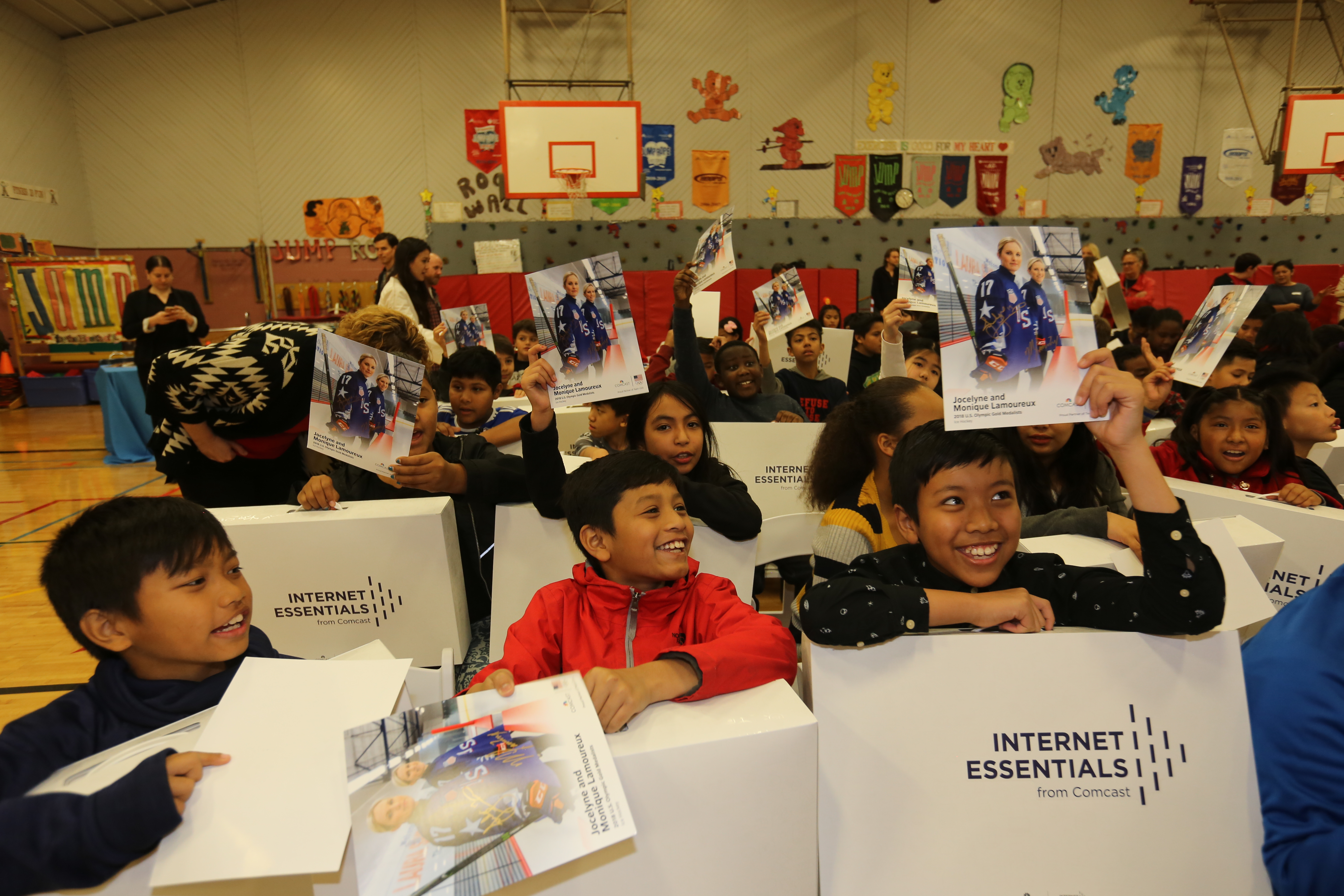 Photos from the Comcast Internet Essentials Back to School events, Tuesday, Oct. 9, 2018, in Seattle. (Ron Wurzer/Comcast)

How do you tell someone about Internet Essentials when they do not have an internet connection?

One of the struggles with helping people get connected to the internet, is getting the word out to them. David told us that in one concerted effort in Philadelphia, they realized that one place a lot of mothers gathered was in beauty shops. So the Comcast team went from shop to shop, providing information to the shops who were willing to help spread the word. Schools, Boys & Girls Clubs, and VA hospitals and veteran service organizations are the most common places that information on Internet Essentials is disseminated.

Schools are another place where they make sure everyone hears about the Internet Essentials opportunity. The morning we met with the team, they had just come from an event at Beverly Park Elementary in Seattle, where Jocelyne, Monique and the Comcast team gave 150 laptops to the 5th and 6th graders. Those kids may not have recognized the Lamoreux twins as gold medal winners, but they will definitely remember them as the women who helped give them a hand up.

So, how do they pick which kids get a laptop?

Comcast is willing to do what it takes. They started with school-aged kids, having each school hand-select about 30 kids to receive a  laptop. David Cohen didn’t care for that method, as he felt some deserving kids would get left out.

He told us a heart wrenching story (yes, I cried in front of Comcast executives and the Olympic gold-medal winners, shh) about a young girl from Miami, who was a very gifted student and the child of a single mother. She would take a lengthy ride to the library after school to use the computers, making the most of the 30 minute limit those public computers have, waiting her turn multiple times until the library closed. Then she would ride the bus 90 minutes home.

Giving her a laptop and a year of internet through Comcast wasn’t just an incredible gift. It was something that could change her whole life. It leveled the playing field for her, making her competitive in the educational arena. 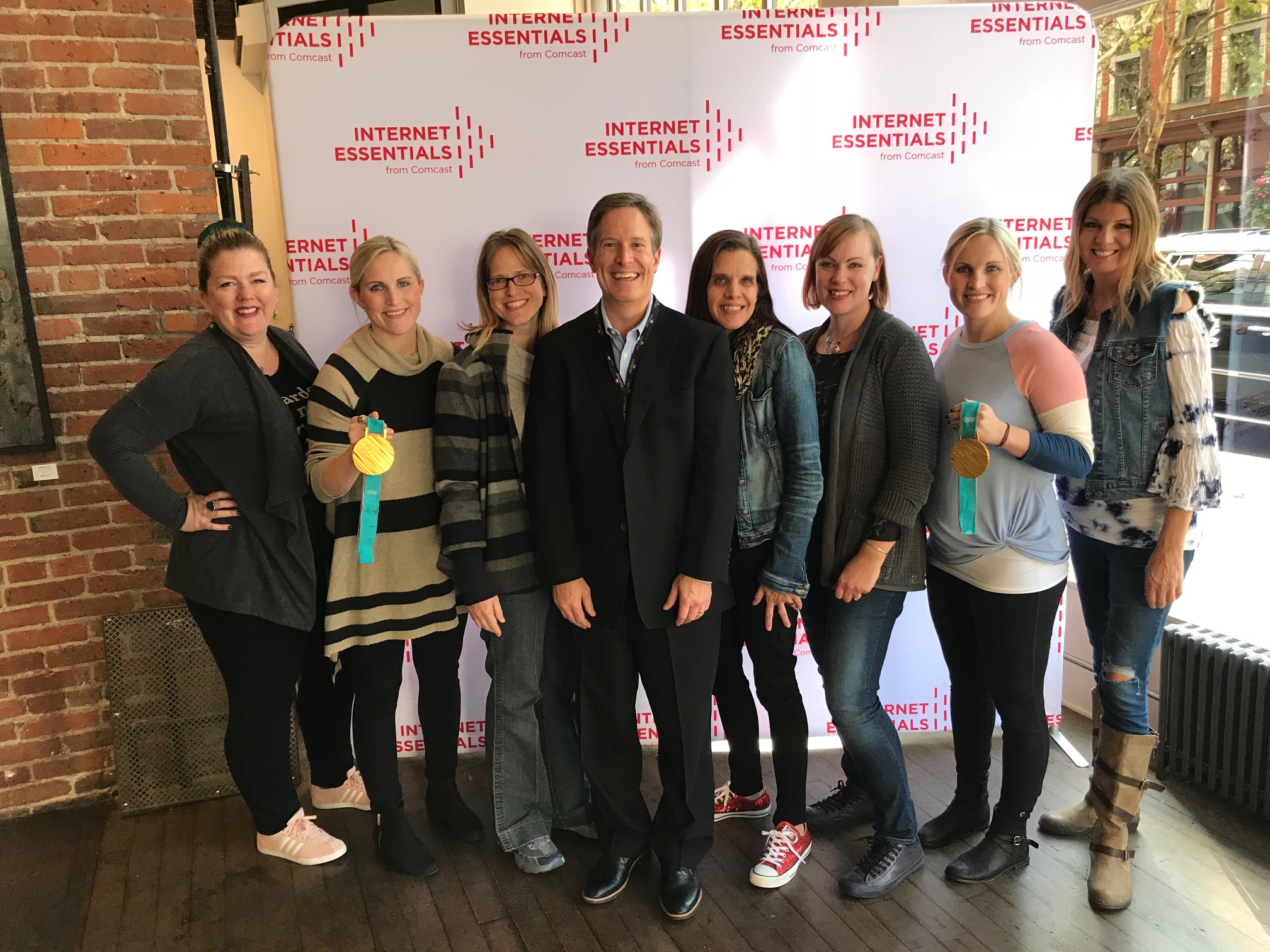 Yes, I got to hold one of the gold medals. And yes, they’re heavier than you think.

Leveling the playing field with Jocelyne and Monique

You can tell just by standing in the same room with them that the Lamoreux sisters are forces to be reckoned with. They are fierce, they are strong and they are very pregnant right now, with one due in December and one in January. Being pregnant has not really slowed down their desire to help as many people as they can, especially in regards to gender equality.

When negotiating their latest contracts with US Hockey, they fought hard for a livable wage and more marketing opportunities for the women’s team. You shouldn’t have to choose between having a career OR children – and these strong women want to show girls that they can have both.

Along with gender equality and leveling the playing fields for girls with female empowerment, Jocelyne and Monique are leveraging the platform that their gold medals have provided by helping David Cohen and the Internet Essentials team to educate people on the importance of digital literacy and bridging that digital gap in America for low income families and households. 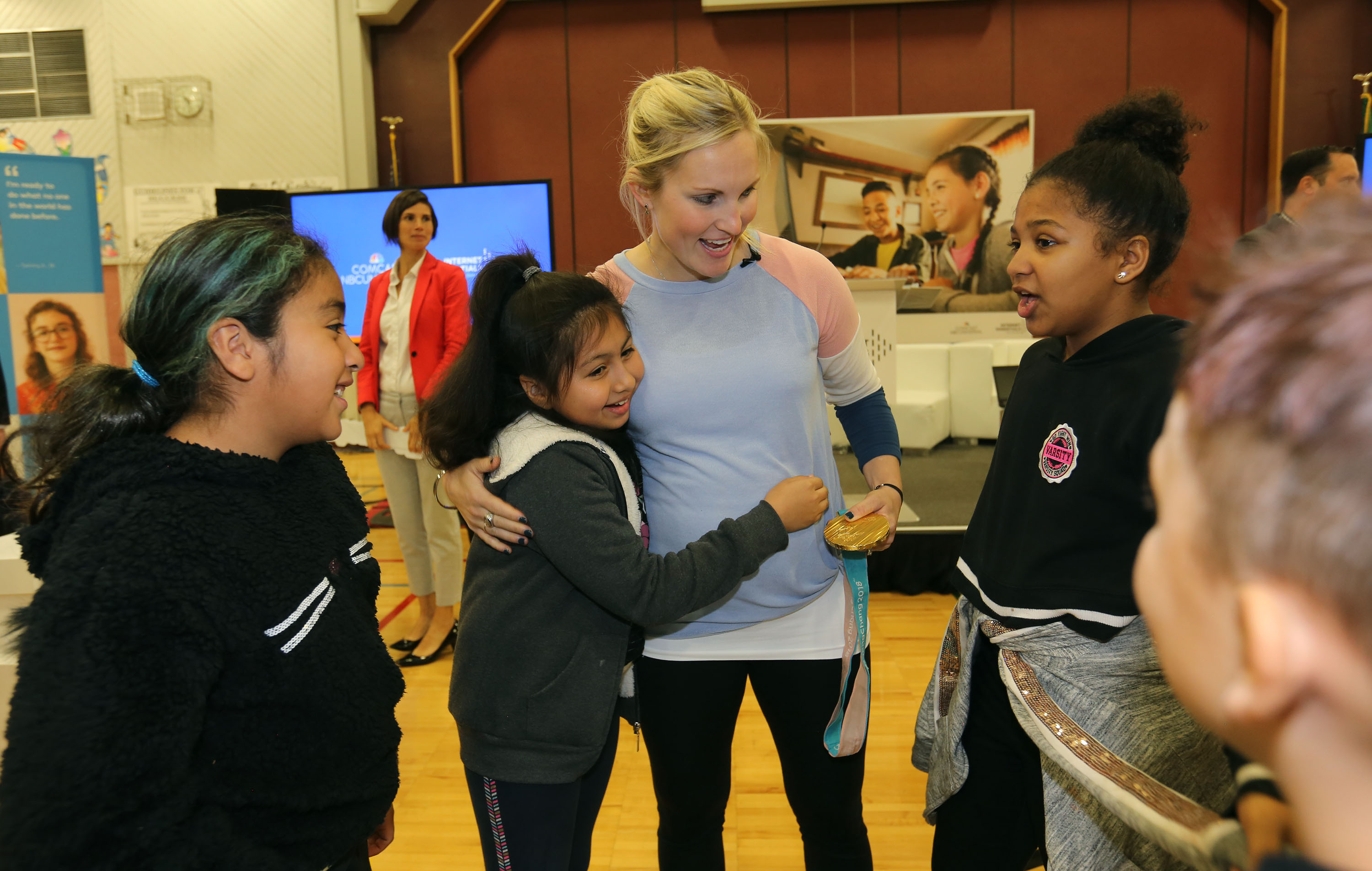 Photos from the Comcast Internet Essentials Back to School events, Tuesday, Oct. 10, 2018, in Seattle. (Ron Wurzer/Comcast)

How do I apply for Internet Essentials, and what exactly does it cover?

Internet Essentials from Comcast is the nation’s largest and most comprehensive high-speed Internet adoption program for low-income Americans.  It provides low-cost high-speed Internet service for $9.95 a month plus tax; the option to purchase an Internet-ready computer for under $150; and multiple options to access free digital literacy training in print, online and in person.  For more information, or to apply for the program, visit www.InternetEssentials.com or call 1-855-846-8376.  Spanish-only speakers should call 1-855-765-6995.